Description of the Castle

On the Park side, the two bodies of the castle are connected by a low wall punctuated by pilasters linked by gates. In the center, a monumental gate is sitted up by allegorical statues representing the Four Elements. Built on a square plan, the castle is made up of two large wings connected, on the Entrance side, by a balustrade and pierced by a portico.

The central pavilion of each wing is decorated with a triangular pediment with war trophies. The dwelling building and the servants’ quarters are each 80 meters long. These two admirable constructions are of similar appearance, of brick and stone, with roof covered in slate. The style is classic with perfect lines. The game of colours and volumes make it a unique set.

The main façade is decorated with busts of Roman Emperors. This principle recall the arrangements made by Louis Le Vau at the “Château de Versailles” on the facades overlooking the marble courtyard.

Of palatial character, only two rooms had survived from the original decoration : the upper vestibule, and the company salon. This drove Jacques Garcia to buy this house to present Royal Items. A set of woodwork, from the same period and from famous origins, came to complete the existing decorations and create one of the most beautiful successions existing in our French Castles.

The succession of these salons, either from Louis XIV, Louis XV or Louis XVI periods, brings us back to the words by the Duke De Talleyrand-Périgord : “Who did not know the End of XVIIIth Century, did not know the Sweet Life”. You will walk back out this visit with the feeling of having gone through the looking glass, and, hopefully, with the deep memory of an impossible dream . 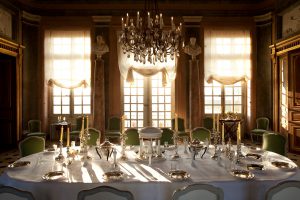 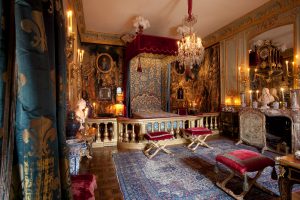 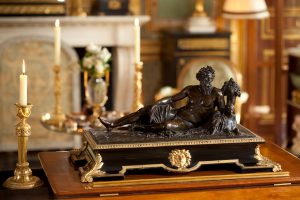